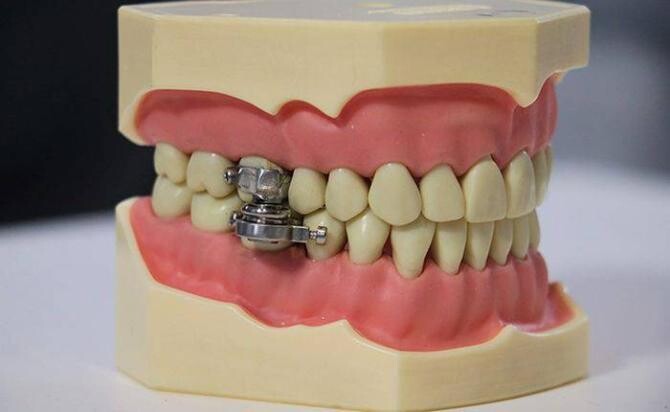 It works on the basis of magnets and does not allow the wearer to open his mouth more than a few millimeters without making breathing difficult. Thus, a fluid-based diet is encouraged.

Overweight people who are trying to lose weight in all possible ways from strict diet, intense sports program, pills, tea and even hunger but haven’t seen results yet receive good news! A revolutionary but also exotic product will enter the medical market. It is about the Dental Slim that promises to help those who wear it shed unwanted pounds. The controversial “device” is installed on tables and allows the mouth to open only a few millimeters so we can breathe and most likely have a protein shake, cream soup or natural juices. Orthodontic “slim” braces can be installed by a dentist and consist of two screws with magnets. When activated, the screws effectively prevent the mouth from opening and the patient is required to follow a fluid-only diet. The device, developed by a team of British and New Zealand researchers, not only prevents us from chewing, but also from talking. Therefore, it will not be worn all the time but only when we are preparing to eat. With the straw, not the fork.

The creators of the prototype believed that their invention could help combat the phenomenon of obesity, which is a major global problem. “The main obstacle for people who want to lose weight is discipline. This device helps them to acquire new habits and follow a low-calorie diet for a certain period of time,” said Professor Paul Brunton of the University of Otago. According to him, it is a non-invasive and much cheaper alternative. of surgical procedures such as gastric bypass, which, in addition to causing permanent changes to the digestive system, can also have unintended consequences.

It was inspired by a torture instrument

In addition to praise, the device received a lot of criticism online soon after it was introduced to the general public. Many have described it as a barbaric instrument and have compared it to a “gossip cap”, a device used in antiquity to humiliate women who “spoke too much” or seemed superior.

Keep up to date with the latest news. Follow DCNews on Google News too