The continued decline in consumption of natural juices, as well as the upward trend in sales compared to other drinks that are constantly evolving, are the “indicators” that show that this is the part that can turn into an engine of growth.

Consumption of fruit juice and nectar rebounded last year after six consecutive years of decline, with sales reaching 58 million liters, or 2.9 liters per capita, according to a study by the European Association of Fruit Juice Producers† (AIJN).

Fruit juices and nectars are part of the non-carbonated beverage category, and it is one of the sectors that has increased in demand in recent years.

Last year, sales of fruit juices and nectarines increased 7% compared to the previous year, in line with the growth trend of the entire soft drink market, a market dominated by “bubble” juices.

However, fruit juices and nectars have become one of the categories of interest to the big players with the increased demand for natural products. This category is an important part of the non-carbonated (“bubble-free”) segment, which accounts for about 40% of the total market for non-alcoholic beverages (including water). 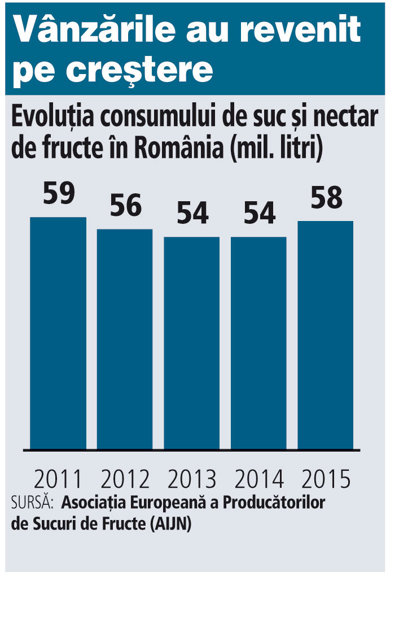 Big players such as Coca-Cola or PepsiCo also place bets on this category, as well as Romanian startups and companies.

“In the fruit juice segment, most of the growth came from the natural, non-concentrate (NFC) juice category, thanks to the entry into the ‘sphere’ of major players who were previously small cider producers. The concentrated juice (FC) segment continues to dominate the market, But it has been steadily developing. The study cited showed that the Natural Juice (NFC) category will be the driver of market growth this year.”

One of the biggest risk raising companies in this market is Coca-Cola HBC, launching Cappy Pulpy. The soft drink market leader invested more than 20 million euros three years ago in the production line of the Cappy Pulpy brand in Ploieşti, the largest investment Coca-Cola HBC has made in recent years, and a sign that it is betting on this category of fruit juices. Coca-Cola HBC’s launch in the fruit juice segment wasn’t the only one, PepsiCo and Tymbark brought new assortments or products to market. Another important name found in this category of “bubble-free” juices is the Romanian company Romaqua Group with the Giusto brand.

However, they became neighbors on store shelves, but also in restaurants or hotels with Roman names such as Ana Are, Sloop, Frupt, Profuctta, Theia or Mellow Drinks.

Last year, every Romanian consumed about 15 cups of 200ml of fruit juices, a number that puts Romania at the bottom of Europe. For example, consumption in Germany reaches more than 29 liters (145 kopecks) per capita per year, in Malta 28 liters, in the Netherlands 25.9 liters, and in Austria 24 liters.

With an average price of 5-6 lei per liter of fruit juice and nectar in stores, ZF calculations show that the market is 60-70 million euros.